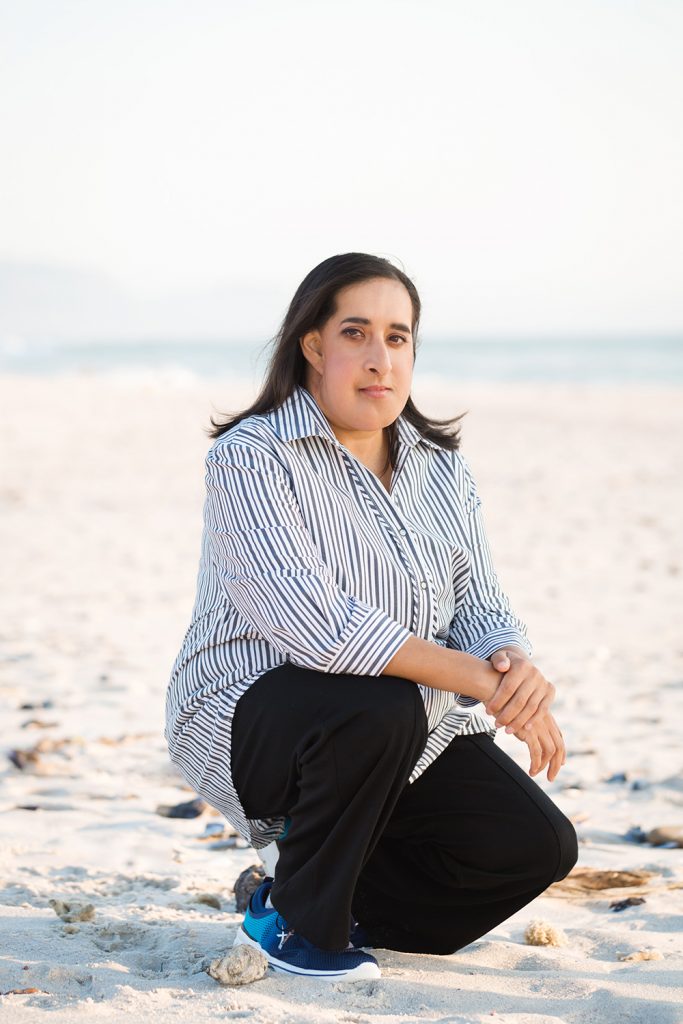 If anyone has ever met or spent time with Zarina Ebrahim, they would know that she radiates positivity, which is infectious.

But many do not know the difficult road Zarina had to travel to get to where she is today.

Zarina is my eldest sister.

We are four children born to Shaik Allie and Kulsum Ebrahim.

Zarina was the only one born with a maxillofacial disorder known as Goldenhar syndrome.

My mom, Kulsum, recalls the day my sister was born: “I was seven and a half months pregnant when I suffered from a placenta failure. Zarina was born via an emergency caesarian, weighing 1.25 kilograms. I remember she was so tiny and we could easily fit her into a shoebox.”

“Zarina was a very special child. She was my firstborn and despite the defect we loved her unconditionally. At times finding suitable treatment for her was difficult due to the financial challenges we faced. But thanks to the family and my gynecologist, Dr Louis Van Der Poel and the late Dr Ralph Diedericks who was my children’s paediatrician, we had an amazing support system.”

My sister’s case was a rare one. At the time, my mom recalls that no private clinic or specialist wanted to treat Zarina. It was at this time that they were referred to the Maxillofacial Department at the Tygerberg Hospital. Under the guidance of Professor Dr Barend Johannes Van Rensburg (Bennie) Zeeman, a group of specialists worked together to develop a treatment plan for my sister.

Her first operation took place when she was just three years old, to remove an excess flap on the lower right ear lobe.

When Zarina was in Grade 6 (Standard 4) she underwent major surgery to construct an artificial tear duct, which would allow her eye’s drainage system to effectively clear any watery blockages in the eye. This procedure involved inserting a narrow tube in her nose and her eyes. Scars are clearly visible on Zarina’s face.

While many Grade 8 (Standard 6) students were experiencing high school for the first time, my sister was preparing to undergo another major operation; this time to rebuild her jawline.

This reconstructive procedure saw one of Zarina’s ribs transplanted into her face and tissue was used form her back to build up the side of her face. She often teases that she cannot feel her face, but only gets glimmers of sensation where the nerve-endings were joined.

Since birth, Zarina has undergone a total of 26 operations.

However, this did not stop her from chasing her dreams.

Growing up alongside my sister, I remember that Zarina always avoided family functions. She was an introvert and she would rarely go out.

However, it was at school and especially while playing tennis that she excelled and began breaking down those barriers, which she built up to create her own safety zone.

My parents were very over-protective of her and would not allow her to do much on her own. I remember being dragged to tennis lessons on a Saturday morning, just because my parents did not want her to go on her own…I did not even enjoy tennis! LOL (It’s funny but 20 odd years later, they still as over-protective as ever.)

Her love for tennis and ten-pin bowling and sports in general is legendary. I remember how our family home would come to a standstill during cricket test matches or during Wimbledon, with Zarina planning her days around Steffi Graf’s matches.

I am amazed at what my sister has managed to achieve in just the last few years alone.

She is an accomplished businesswoman with a portfolio of clients and work that is remarkable, especially since she is entirely self-taught.

Zarina is a force of nature. I hope that you find her story as inspiring as we have and that you walk away feeling empowered with the knowledge that anything in life is possible.

I am delighted that my sister has embarked on this journey to document her story so that she can inspire so many more people.

Zarina you make us proud every day. It has been such a blessing to watch you grow into the successful woman you are today. We love you and wish you everything of the best with your future endeavours.